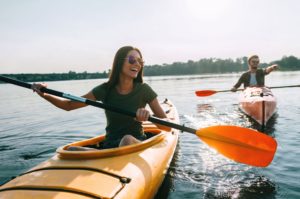 The beginning of the history of the airport in Szymany dates back to the 1930s. At the beginning, the airport did not have extensive infrastructure, as it was considered as temporary for the period of blitzkrieg. For this purpose, approximately 100 ha of forest were removed, and the surroundings made it well hidden and did not reveal its purpose. The old runway (preserved to this day) was 1200×60 meters. It was located several hundred meters east of the current infrastructure. Farm buildings, mainly consisting of wooden barracks, were near the airport. At the beginning of World War II, the airport was used intensively by German military aviation. Later, it lost its importance and was mainly used for training flights. The movement revived again after the Third Reich declared war on the Soviet Union. After the World War II, the airport fell into the hands of the Soviets. However, Stalin’s army left this area in the fall of 1945. At the same time, the Masurian Lake District was incorporated into Poland, and the airport was forgotten.

In the 1950s, under pressure from the Soviet authorities, the airport was selected to be expanded and be the base of fighter regiment. Post-war Polish economy was not able to finance air divisions composed of three regiments, therefore the airport in Szymany was designated as an auxiliary airport for the 1st Fighter Air Regiment stationed in Mińsk Mazowiecki. In the years 1950-1960 the airport infrastructure was significantly expanded. The airport area increased, a new concrete runway, taxiways and aprons were built. MPS was expanded, brick buildings of the fuel laboratory were built, and tanks were placed in hollows surrounded by high earth embankments. In 1963, the parameters of the airport were raised to military class II.

For many years, the airport did not have a flight control tower, The position placed on the STAR 66 truck, commonly known as “krasula”, was operated as such a tower. Frequently, radar stations mounted on trucks operated at the airport. The NDB non-directional electronic beacon was the basic navigational aid. Meteorological information was obtained by phone from Olsztyn or Warsaw. The main user of the airport was the 1st Fighter Air Regiment in Mińsk Mazowiecki, but also other regiments such as: the 25th Fighter Air Regiment from Pruszcz Gdański, the 29th Fighter Air Regiment from Orneta, the 41st Fighter Air Regiment from Malbork, or the 55th Air Transport Regiment from Balice. In the second half of the 1970s, a flight control tower, as well as airport buildings and technical facilities were built. At the beginning of the 1990s, the airport became unnecessary for the needs of the Polish Army, but nevertheless demanded to preserve the air character of the facility. In 1995, the airport was transferred to the Military Property Agency, and a year later the Voivode of the Warmia-Mazury Voivodship established a limited liability company: Mazury-Szczytno Airports.

On June 2, 1996 at the airport in Szymany, LOT Polish Airlines – ATR72 airplane landed for the first time with passengers on board. In the summer season, once a week, LOT Polish Airlines made connections with Warsaw and some other airports. On October 10, 2001, the airport was added to the list of airports at which take-offs and landings in international traffic can be carried out, and therefore a border crossing had to be organized. Since 2002, LOT Polish Airlines has begun operating flights to some airports in Germany. On August 22, 2002, the airport was officially transferred to AMW and can now be sold. On May 14, 2003, the company obtained the Ground Service Agent certificate in the field of passenger, baggage, plate service of aircrafts, service in the field of fuel supply of aircraft, ground transport between aircraft and airport. As a result of low interest in flights, PLL LOT suspended flights in 2003. In 2010, the airport in Szymany was taken over by the Local Government of the Warmia-Mazury Voivodeship. A year later, the “Warmia and Mazury” company was established, which has managed the airport to this day.

The project implemented in 2007-2013 assumed the expansion of the airport for nearly PLN 205 million. The construction of the Olsztyn-Mazury Airport was completed at the end of 2015. In the last months of modernization, appropriate documentation was prepared, staff were trained, and individual systems were started and tested. After nearly 6 years of intensified work, on January 18, 2016, the airport obtained the Civil Aviation Authority certificate confirming compliance with all requirements for public use airports subject to certification. Two days later, the Marshal of the Warmia-Mazury Voivodeship, Mr. Gustaw Marek Brzezin, officially opened the Olsztyn-Mazury Airport for passenger traffic, and the airport joined the group of the 15 largest airports in Poland. Simultaneously with the opening ceremony at the airport Berlin-Tegel in Germany, a press conference was held inaugurating the start of the first regular passenger connection on the Olsztyn-Mazury-Berlin route. On January 21, 2016, the first Sprint Air flight to Berlin took place.  Saab 340 airplanes, carrying 33 passengers, flew to Krakow and Berlin. Currently, the airport operates under the airport certificate in accordance with the requirements of Commission Regulation (EU) No. 139/2014, which was granted by the President of the Civil Aviation Office on January 3, 2018 by the President of Warmia and Mazury.

Today, the Olsztyn-Mazury Airport holds the 4C code, i.e. it is adapted to operate aircraft with a wingspan of up to 36 meters, such as Boeing 737-800 or Airbus A321. The infrastructure and airport certification also allow the accomodation of larger machines under certain conditions. An asphalt concrete runway of 2500 meters long and 45 meters wide is the main infrastructure element. Direction of 01 runway has full instrumentation allowing operations in conditions of limited visibility, i.e. category I (CAT I) operations. This allows instrument approach and landing at a decision height of not less than 60 meters (200 feet) and visibility of not less than 800 meters, or within runway visibility (RVR) of not less than 550 meters. In addition, the runway is equipped with a number of modern sensors and devices that provide meteorological and technical information to the airport services. The Olsztyn-Mazury Airport offers parking spaces with a total area of ​​27.000 square meters, aviation fuel AVGAS 100LL and JET A-1, and a full range of ground handling of passenger aircraft. At the airport, the Airport Rescue and Fire Fighting Service operate and provide 5 categories of airport fire protection (ICAO), which can be increased to category 7 at request. The airport also provides air traffic services, meteorological services, customs and border guards.